By AZFamily Digital News Staff and The Associated Press

FLAGSTAFF, AZ (3TV/CBS 5/AP) — Crews are making considerable progress as two big wildfires continue to burn. As of Wednesday morning, Coconino County forest officials said that the latest estimate placed the Pipeline Fire at 22,888 acres burned with 33% containment. The nearby Haywire Fire grew slightly to 5,065 acres with 11% containment. On Wednesday night, Highway 89 was reopened in both directions from mileposts 426, near Copeland Lane, to 433, or near Tank Seven. However, the left lane remains blocked. U.S. 89 remains closed in both directions from mileposts 433 to 445, which is a mile south of Hank’s Trading Post.

Officials say the use of 6 helicopters and two tankers was instrumental in Tuesday’s attack on the fires. The Forest Service told Arizona’s Family that they were able to make good headway and hope to do the same throughout the rest of the week.

Authorities have since downgraded evacuations for the Pipeline Fire burning on the outskirts of Flagstaff. Officials say that fire made a run into a wilderness area and reached a lava dome to the northeast, away from most neighborhoods. One home and a secondary structure had burned, the Coconino County Sheriff’s Office said. At last check, about 350 homes remained evacuated. A Type 1 team is now expected to take over the firefight on Thursday.

Authorities downgraded evacuation orders Tuesday, but people in about 700 homes still were under orders to stay out of the area.

Rain is in the forecast 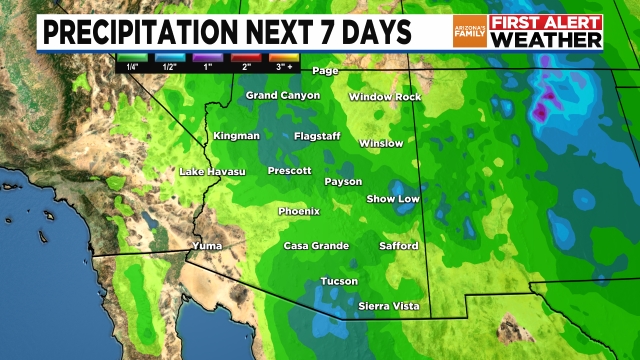 As Red Flag warnings expired and winds died down in northern Arizona, firefighters took advantage of the weather changes to attack a 31-square-mile blaze by air and at the fire’s edges. Arizona’s Family First Alert weather team is calling for possible rain showers later this week.

Wednesday marks the official start of this year’s monsoon season, and a low-pressure system could bring critical rainfall to parts of the high country. And while it could dampen the blaze, it could also mean the chance of new fires forming from lightning strikes.

The following areas are listed under a “GO” status:

The following areas are listed as “SET” status (pre-evacuation):

What are nearby states experiencing this fire season?

The number of square miles burned so far this year is more than double the 10-year national average, and states like New Mexico have already set records with devastating blazes that destroyed hundreds of homes while causing environmental damage that is expected to affect water supplies.

Nationally, more than 6,200 wildland firefighters were battling nearly three dozen uncontained fires that had charred over 1,780 square miles (4,611 square kilometers), much of it in the U.S. Southwest, according to the National Interagency Fire Center.

The Associated Press contributed to this report.