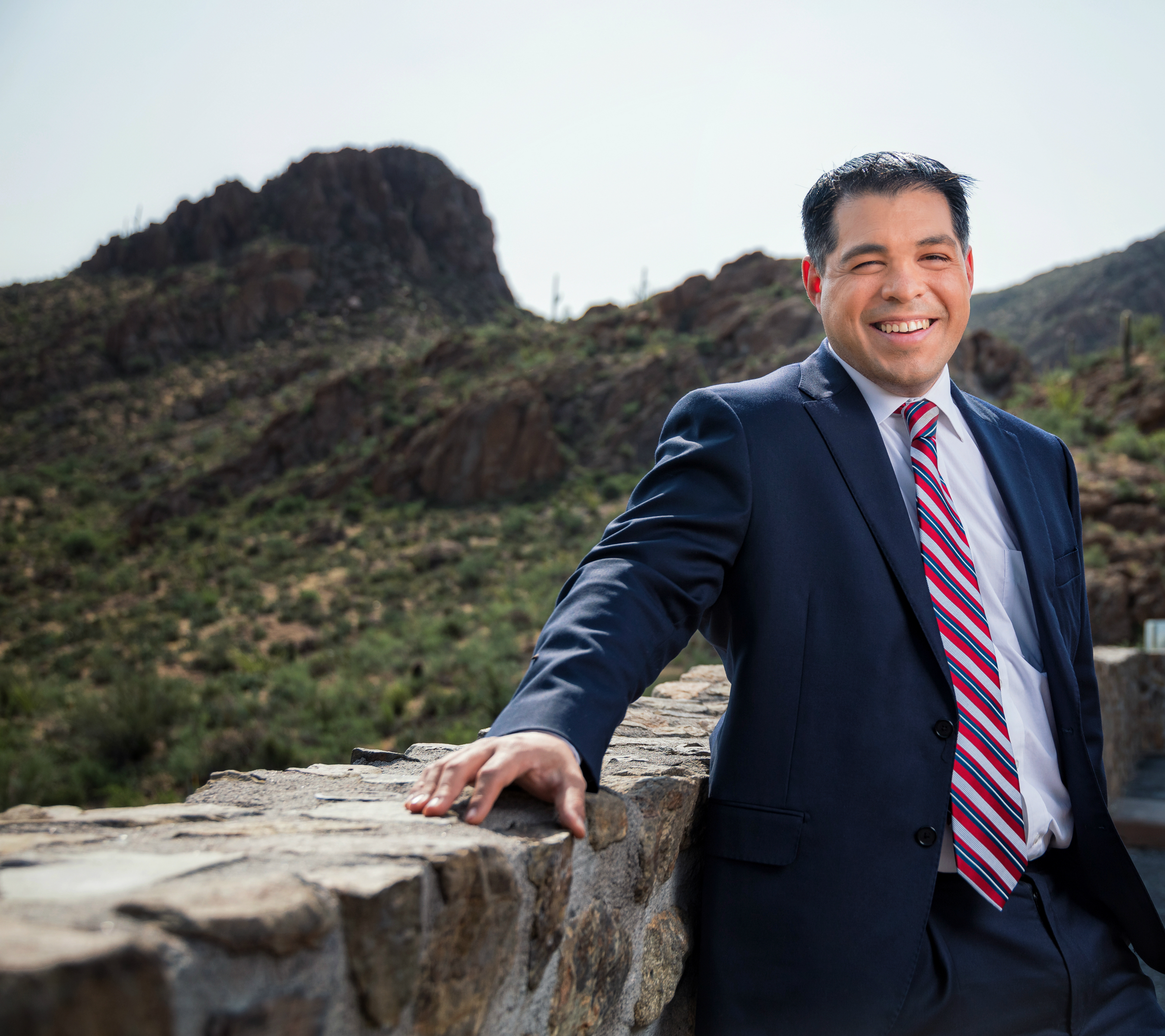 He comes to the desert from Jacksonville, FL, where he was an anchor and reporter. While there, Andrew covered stories ranging from an Amber Alert for a 21-month-old boy, to an exclusive interview with the Commanding Officer of the USS Iwo Jima, days after playing a role in the fight against ISIS.

Before Jacksonville, Andrew was the Executive Producer, Reporter, and Anchor in Baton Rouge, LA. That's where he was the first local reporter on the coast when BP's Deepwater Horizon oil leak happened, and broke several stories in the years of covering that event. Andrew got his start as a reporter in Butte and Bozeman, MT.

Andrew studied journalism and psychology at Eastern Connecticut State University in Willimantic, CT, not far from his hometown of Marlborough.

While not covering news, Andrew spends time with his wife and their beautiful daughter Adrianna. He's looking forward to winters in the desert, and not having to shovel snow, like he did for years at home.

|
By Andrew Capasso
Arizona Sen. Mark Kelly said there are things state and federal governments can do to lower the cost of gas.

|
By Andrew Capasso
The $100 million initiative can already serve 75,000 kids across Arizona.

CONQUERING COVID: Pandemic has changed everything for students

|
By Andrew Capasso
As new cases of the COVID-19 start to drop, some southern Arizona teachers say it could be some time before kids are where they should be academically.

|
By Andrew Capasso
As families travel and gather for the holidays, concern is growing about the COVID-19 omicron variant and a very likely spike in cases.

|
By Andrew Capasso
As COVID-19 cases spike across Arizona, breakthrough cases are getting more attention.

|
By Andrew Capasso
The Pfizer COVID-19 vaccine has been available under Emergency Use Authorization for about two weeks, and the CDC says more than 1 million kids have rolled up their sleeves.

CONQUERING COVID: Inside the emergency room

|
By Andrew Capasso
As we get closer to the two-year mark of the pandemic, doctors said things are not changing much in Tucson emergency rooms and ICUs.

|
By Andrew Capasso
In this series, Andrew Capasso will talk with science and medical experts about where we are in this pandemic.

|
By Andrew Capasso
Dr. Francis Collins, Director of the National Institutes of Health, said young kids are getting sick from the delta variant of COVID-19.

|
By Andrew Capasso
Students will see social distancing and lots of cleaning happening throughout the day.

|
By Andrew Capasso
As case numbers rise, some parents say they are concerned about sending kids back to the classroom.

Where Arizona senators stand on the filibuster

|
By Andrew Capasso
Eliminating of the rule would lower the threshold to pass bills from 60 votes to a simple majority of 51.

|
By Andrew Capasso
Aims to help get service members mental health help faster if they need it.

ONLY ON KOLD: Rep. Kirkpatrick on divided Congress, what lies ahead

|
By Andrew Capasso
Arizona lawmaker Ann Kirkpatrick said she is ready to spend more time with her family.

|
By Andrew Capasso
School districts across the state will have flexibility on how the federal funding will be spent. Leaders are required to submit reports, detailing how they’re spending it and those reports will be public.

|
By Andrew Capasso
Sen. Kyrsten Sinema, D-Arizona, said she would like to see the federal minimum wage increase.

|
By Andrew Capasso
Ducey says the infrastructure and resources are in place to get more doses out than what’s being offered.

|
By Andrew Capasso
Arizona’s newest United States Senator, Mark Kelly says he’s not reflecting on his new role. He says he is getting right to work.

|
By Andrew Capasso
Mark Kelly, who is running for Senate, said healthcare is one of the biggest issues facing Arizona residents.

|
By Andrew Capasso
Vice President Mike Pence visits Arizona to talk about the reopening of schools during the COVID-19 pandemic.

|
By Andrew Capasso
Congressman back in district during break

|
By Andrew Capasso
Recession will happen; the question is when?

|
By Andrew Capasso
Students at the Academy of Math and Science on Prince say they are ready to pay tribute to a former student who was taken too soon.

KOLD Heroes: The woman behind a foundation helping families of First Responders

|
By Andrew Capasso
Kent’s Heart and Hope Foundation helps first responders and their families as they go through illness, treatments, and other issues that come up that sideline them for a while. It includes everything from keeping families afloat to lifting spirits.

|
By Andrew Capasso
Arizona Republican Senator Jon Kyle says he’s not surprised big names like President Donald Trump and Senator Bernie Sanders are making stops in Arizona in the weeks before the midterms.

KOLD HEROES: 10-year-old helping others to get what they need

|
By Andrew Capasso
10-year-old Alexia Serna isn't focused on the typical things a child her age. Instead, she wants to make sure the people around her, even complete strangers, have what they need.

|
By Andrew Capasso
Two women will battle it out to be the next representative for Arizona's Second Congressional District.

|
By Andrew Capasso
Her mother, Regina, says Hannah fights with a smile and a positive attitude every day. "She's just a fighter. She's an amazing girl, she's such a little warrior," she says. Ochoa also has Down's Syndrome.

|
By Andrew Capasso
Roberto Veyeia says his goal is to make the lives of those who need help, better. It's something he's been doing in a Tucson community for decades.

|
By Andrew Capasso
TUCSON, AZ (Tucson News Now) - As Arizona Representative Raul Grijalva gets ready to head back to D.C, he says he's bringing lessons learned from his visit to Nogales. Rep. Grijalva also says the U.S Senate should wait until after the November midterms to vote on a Supreme Court nominee.  He says the balance of power in the House, the Senator, or even both, could change.   Grijalva says if that happens, the President should re-think the direction to take for a nominee....

|
By Andrew Capasso
TUCSON, AZ (Tucson News Now) -  Lucia and Tyler Miller say they're ready for the second year of the Renaissance Academy of Tucson to start.   The school is dedicated to helping middle and high school students with special needs get the extra help they need.   Lucia calls it her "dream school". "As soon as I took my first special education class, I know this was my calling.  I knew this is what I'm supposed to do," she says. Luc...

|
By Andrew Capasso
Before Nicholas Badalamenti starts his sophomore year at NAU, he's headed to Pittsburgh to help his cousin Sarah Foreman by donating part of his kidney.

|
By Andrew Capasso
SAN XAVIER MISSION (Tucson News Now) - A team of about 6 are hard at work at several projects at the San Xavier Mission.   For these workers, many look at doing the work as an honor. "It's very gratifying because we're preserving something that our ancestors built 220 years ago," said Timothy Lewis.   He's been working on different projects for almost 30 years.   He says when he's at work, nothing else matters. "You lose time," he sa...

|
By Andrew Capasso
Larry Hecker turns 95-years-old in just a few weeks. However, he's busy around the clock at work, and inspiring others.

|
By Andrew Capasso
Workers are in the middle of a decades-long renovation project at the San Xavier Mission.

|
By Andrew Capasso
As President Trump prepares for his first State of the Union speech, Tucson-area lawmakers are weighing in on what he'll say, and how it'll impact Arizona.

|
By Andrew Capasso
Ann Kirkpatrick spoke with Tucson News Now about her hopeful return to the House of Representatives.

|
By Andrew Capasso
Billy Kovacs, the first Democrat to announce his candidacy for Representative Martha McSally's seat, spoke with Tucson News Now about his decision to get into the race.

|
By Andrew Capasso
Lea Marquez-Peterson, the President of the Tucson Hispanic Chamber of Commerce, spoke with Tucson News Now about her decision to get into the race for Representative Martha McSally's seat.

KOLD Investigates: Protecting you at the pump

|
By Andrew Capasso
When you stop and pump gas, do you know if the pump you're using is safe and accurate? In a KOLD News 13 Investigation - we looked into how often pumps are inspected in Arizona, how your information is protected, and how you get every drop of gas you pay for.

CRIME TEAM: How safe is your child on the playground?

|
By Andrew Capasso
How safe is your child on a playground? Our investigation revealed answers that may surprise you.

Millions turning to family and friends for financial help

|
By Rachel DePompa
More than 25 million people relied on loans from those close to them to meet spending needs, according to the Census Bureau’s latest household pulse survey on finances. That figure is up from 19.1 million people from the same time last year.

PD: Security guard shot and killed after refusing to let a man into a bar in Phoenix

|
By AZFamily Digital News Staff
Detectives spoke to multiple witnesses who were in the bar parking lot and pieced together what led up to the shooting.

|
By The Associated Press
Danish police say several people have been shot at a Copenhagen shopping mall. Copenhagen police said that one person has been arrested in connection with the shooting at the Field’s shopping mall on Sunday.

|
By Dani Birzer
Yavapai County police say around 2:45 p.m. they arrived at the scene to find an unresponsive person in a car near the store.

|
By The Associated Press
The incident is one of several recent instances in which law enforcement officers were fired upon while responding to calls.

|
By Amanda Alvarado and Avery Williams
The video’s release comes as demonstrations are taking place around the city, with at least two planned for Sunday.

|
By Mikala Novitsky
In an effort to make prices come down, some are planning a gas protest starting July 3. Experts say it could make a difference if done right.

|
By Amanda Alvarado and Jordan Mullins
The community is banding together, with hundreds of locals lining the roads for processions to welcome the fallen officers home.

Feds: R. Kelly remains on suicide watch ‘for his own safety’

|
By The Associated Press
Federal authorities are pushing back on claims that R. Kelly was placed on suicide watch as a form of punishment last week after a judge sentenced him to 30 years behind bars for using his fame to sexually abuse young girls.

|
By The Associated Press
A member of the House committee investigating the Jan. 6 riot says more evidence is emerging that lends support to recent testimony that President Donald Trump wanted to join an angry mob that marched to the Capitol and rioted.

|
By Allie Potter
UArizona Campus Rec is stepping in to turn a dark cloud into “Operation Sunshine.”