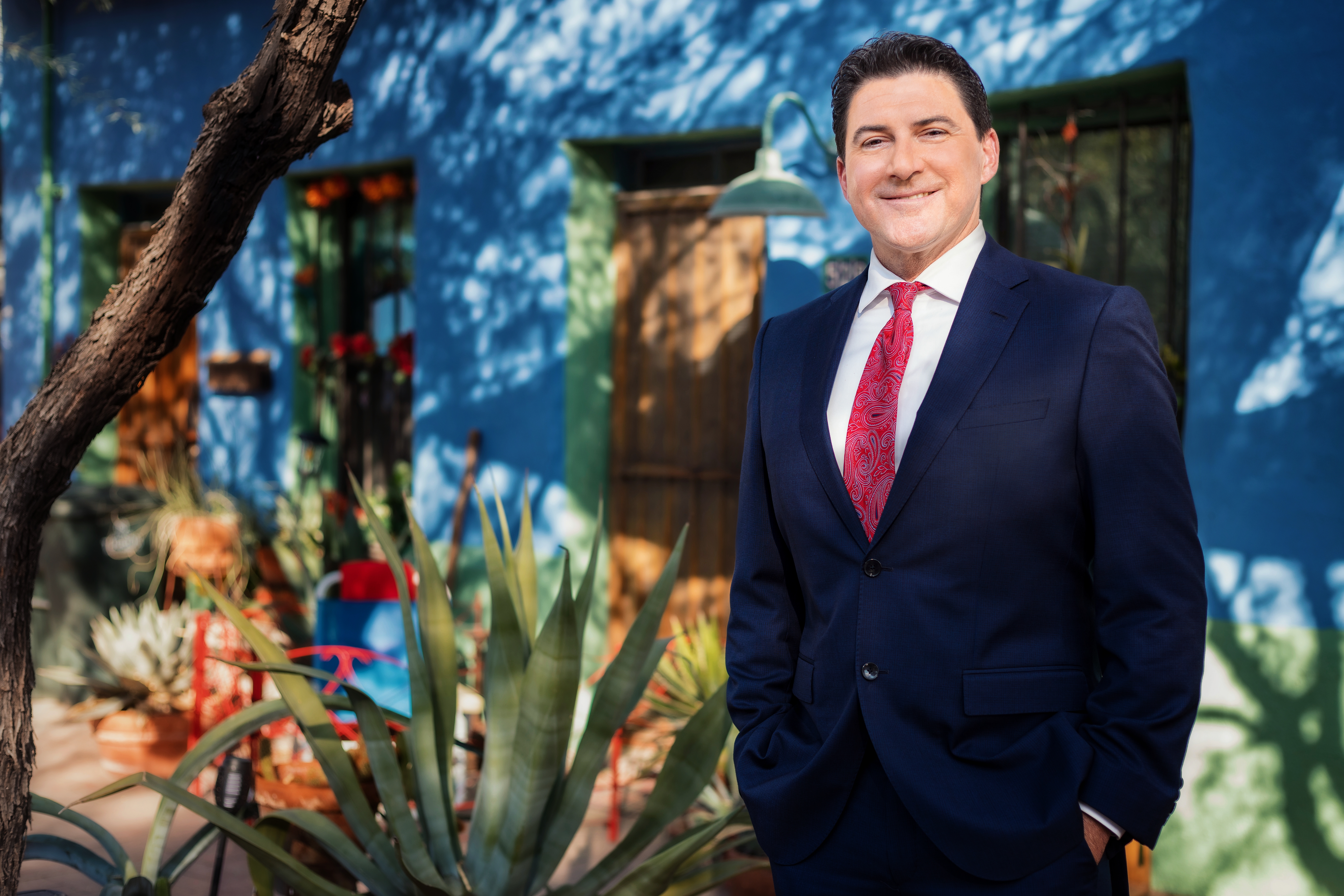 Find a job you love and you'll never work a day in your life.

That is exactly how Dan Marries feels about working as the evening news anchor at KOLD News 13, where he’s been keeping Tucsonans informed since 1999.

Dan got his start in television news in 1995 while he was still a junior at Mesa State College in Grand Junction, CO. His internship lead to his first job in journalism as the morning anchor and noon weatherman. Further news jobs took him to Mankato, MN, Yuma and finally Tucson. It was also during college he spent four summers as a wildland firefighter for the Bureau of Land Management.

Dan is the father of three boys -- Kurtis, Dean, and Preston, who was born on April 27, 2019. He's the lucky husband of Jennifer, who's originally from Nassau, Bahamas. The were married in 2010 and love calling Tucson home.

Dan is heavily involved in our community. He's the charter president of the Casas Adobes Optimist Club. For the past several years that club has adopted upwards of 30 less-fortunate families during Christmas, making sure the kids have presents under the tree and food on the table.

Every year he volunteers during Love of Reading Week, spending time with children letting them know the importance of education. He’s also a frequent visitor to the Southern Arizona VA Medical Center, visiting with veterans to thank them for their service. For the past 11 years he has served as the official announcer for the Tucson Veteran’s Day Parade and the Tucson Rodeo Parade telecast. His schedule is kept busy emceeing and attending hundreds of fundraisers.

Dan has been recognized with numerous awards as a journalist including two Emmys, one which came from a half-hour documentary he shot, wrote and produced on one of his three trips to Vietnam with local veterans. He won a Communicator’s Award for a rodeo story on legendary Ty Murray, and Ty’s efforts to give retired bucking horses a place to live. He’s also been recognized several times by the Arizona Associated Press.

Looking toward the future of Raytheon

|
By Dan Marries
Raytheon Missiles and Defense is marking its 70th year in southern Arizona.

|
By Dan Marries
Raytheon Missiles and Defense is marking its 70th year in southern Arizona. In partnership with BizTucson magazine, KOLD News 13 is taking you inside the company to see how they’ve impacted aerospace and defense, as well as the Tucson community.

|
By Dan Marries
Students at a small southwest side school have been busy and today all of their hard work paid off.

|
By Dan Marries
Boom reported by people from Vail to Oracle.

|
By Dan Marries
This is what happens when they come together where the Rillito River begins.

|
By Dan Marries
It’s called the Silverbell Gateway Distribution Center and it’s going up at Ina and Silverbell roads in Marana, making for some unhappy neighbors.

|
By Dan Marries
Trackman calculates how far the golf ball is carried through the air, and what the total distance would have been without the air factor.

|
By Dan Marries
We’ve been inundated with hundreds of messages on Facebook; people from near Green Valley all the way to Picture Rocks report feeling or hearing it.

|
By Dan Marries
Ron Barber, who survived the Jan. 8 shooting, said a mental health problem should not a stigma.

|
By Dan Marries
Judy Rich, the president and CEO of Tucson Medical Center, is asking that schools offer more options for in-person learning.

|
By Dan Marries
It’s the first time in more than 100 years the Gila topminnow is swimming again in this section of the Santa Cruz.

The origins of Old Tucson, as told by the founder’s wife

|
By Dan Marries
Carolyn Shelton remembers her late husband, Bob Shelton, and the legacy he left behind at Old Tucson.

|
By Dan Marries
As the U of A prepares to resume in-person classes this fall, university leaders are receiving push back from members of the campus community who delivered a letter opposing the re-entry plan.

Pima County Board of Supervisors candidate under investigation

|
By Dan Marries
While the Bighorn Fire continues to burn, the threat of flames is shifting to the threat of flooding- and recently shot video shows just how dangerous, even deadly, the situation can be.

|
By Dan Marries
With close to 35 years of wildland and forest firefighting experience, John Pierson is in charge of forming strategy to contain the Bighorn fire keep firefighters safe.

|
By Dan Marries
Despite its own hardships, one Tucson pizza joint is giving back.

|
By Dan Marries
“These are the kind of things that got us into trouble before, funding things that don’t pay taxes."

|
By Dan Marries
Now, there’s one big question left: Will it work?

Back to back centennials in downtown Tucson

|
By Dan Marries
The “100” sitting underneath Hotel Congress is being removed and placed on the Rialto Theatre.

|
By Dan Marries
The Central Arizona College rodeo team showed off its dance moves in the Git Up Challenge.

|
By Dan Marries
In his third visit to Arizona this year, Vice President Mike Pence spent a few hours in southern Arizona to talk about trade and immigration.

|
By Dan Marries
The human-caused fire left a devastating impact.

|
By Dan Marries
“We’re so happy to be able to celebrate these people who have lived amazing lives and have done amazing things both here in Tucson and the other communities they’ve live in,” said W. Mark Clark with Pima Council on Aging.

Reminder that fire season has returned to southern AZ

|
By Dan Marries
It broke out in the Santa Cruz River off Silverbell just south of Camino del Cerro on Friday evening.

|
By Dan Marries
In recent months KOLD News 13 has been showing video and pictures of large groups of asylum seekers illegally crossing into Arizona from Mexico...but Tuesday night there is new video showing the dangers of armed human smugglers.

|
By Dan Marries
A PCSD Drug Interdiction Unit pulled over a vehicle at Congress Street and Interstate 10 on Thursday morning.

|
By Dan Marries
And so the mystery continues...

|
By Dan Marries
The Tucson Rodeo Parade will go on as planned after Union Pacific Railroad agreed to stop its trains for the event.

|
By Dan Marries
The workers at a food trailer were in the process of tearing down and moving after they say city employees told them to leave since they didn't have the proper licenses, including a peddler's permit.

|
By Dan Marries
Here's a Christmas light display that is sure to put you in the holiday spirit.

Businesses coming together to provide home repairs, modifications for veterans

|
By Dan Marries
The collaboration has formed to help raise awareness and interest about the housing challenges faced by older service-connected disabled veterans and their caregivers living in Tucson. The goal is to allow the chosen veterans to age peacefully at home without the added worry of costly repairs.

|
By Dan Marries
When Tucson firefighters are called out to help, the last thing they should be worried about is being attacked but it's happening more frequently.

|
By Dan Marries
A difficult subject to discuss takes center stage in Tucson Thursday night.   "Bang, Bang, You're Dead" is a school play dealing with school violence and its tremendous impact on all of the community, but especially the students.

Mystery behind miniature masterpiece of western art has been solved

|
By Dan Marries
No one knew who about the people who built it other than their first names-Paul and Wilma. A viewer gave me their last name and that led me on a journey to find out more.

|
By Dan Marries
Pima County Sheriff's investigators are looking for a person of interest in a double murder homicide case from Three Points.

Loud booms heard across southern Arizona may be from Luke AFB

|
By Dan Marries
The mystery continues to grow as to what is causing loud booms felt and heard across southern Arizona, from Oro Valley to Picture Rocks, and Douglas to Nogales.

ONLY ON KOLD: Beyond the battle with breast cancer

|
By Dan Marries
Cancer is a word we all hate to hear and it has impacted nearly everyone. Nadia Larsen, herself a breast cancer survivor, is using a gift for photography to remind other women of their Beautiful Beyond Breast Cancer.

|
By Dan Marries
Nearly a week after a horrific industrial explosion on Tucson's south side, two of the employees continue to fight for their lives at the burn center in Phoenix. Isidro Olvera is one of them.

|
By Dan Marries
The Pima County Sheriff's Department's Rescue and Air units were honored on Thursday at La Encantada for their for their heroic actions during the monsoon.

|
By Dan Marries
A man was detained and questioned, however no arrest has been made.

Millions turning to family and friends for financial help

|
By Rachel DePompa
More than 25 million people relied on loans from those close to them to meet spending needs, according to the Census Bureau’s latest household pulse survey on finances. That figure is up from 19.1 million people from the same time last year.

PD: Security guard shot and killed after refusing to let a man into a bar in Phoenix

|
By AZFamily Digital News Staff
Detectives spoke to multiple witnesses who were in the bar parking lot and pieced together what led up to the shooting.

|
By The Associated Press
Danish police say several people have been shot at a Copenhagen shopping mall. Copenhagen police said that one person has been arrested in connection with the shooting at the Field’s shopping mall on Sunday.

|
By Dani Birzer
Yavapai County police say around 2:45 p.m. they arrived at the scene to find an unresponsive person in a car near the store.

|
By The Associated Press
The incident is one of several recent instances in which law enforcement officers were fired upon while responding to calls.

|
By Amanda Alvarado and Avery Williams
The video’s release comes as demonstrations are taking place around the city, with at least two planned for Sunday.

|
By Mikala Novitsky
In an effort to make prices come down, some are planning a gas protest starting July 3. Experts say it could make a difference if done right.

|
By Amanda Alvarado and Jordan Mullins
The community is banding together, with hundreds of locals lining the roads for processions to welcome the fallen officers home.

Feds: R. Kelly remains on suicide watch ‘for his own safety’

|
By The Associated Press
Federal authorities are pushing back on claims that R. Kelly was placed on suicide watch as a form of punishment last week after a judge sentenced him to 30 years behind bars for using his fame to sexually abuse young girls.

|
By The Associated Press
A member of the House committee investigating the Jan. 6 riot says more evidence is emerging that lends support to recent testimony that President Donald Trump wanted to join an angry mob that marched to the Capitol and rioted.

|
By Allie Potter
UArizona Campus Rec is stepping in to turn a dark cloud into “Operation Sunshine.”